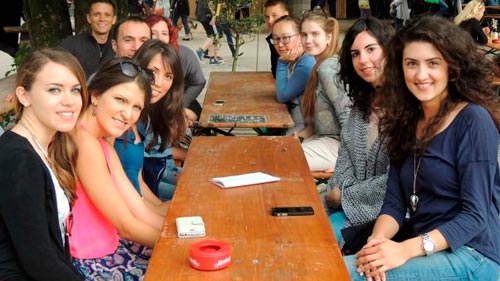 The Viktualienmarkt in Munich is an Experience like None Other!

The Viktualienmarkt is one of Munich’s gems. It was formally known as the “Green Market”, but it is now called the ‘Viktualienmarkt’. It is the most well-known market in Bavaria’s capital, Munich. The city and the market have a long, rich history and set of traditions that makes it like no other city. It is now considered on the of best and most important sights to see in the city and essential to any tourist’s plans.

From the Green Market to the ‘Viktualienmarkt’

Since the 19th century, there was a “Green Market” in the old, historical section of the city in the main plaza, Marienplatz. The market had famers and other vendors selling their produce and products at the market. Soon, the yearly expansion of the market was too great for it all to fit Marienplatz. It was later moved between the Heilig Geist Kirche (Holy Ghost Chruch) and Frauenstraße where it can be found today. As time went on, the ‘Green Market’ began to offer more diverse goods, like fish, meant, and fruit. Unfortunately, due to World War II, the market was completely destroyed. When the war was over and the city of Munich was building itself up from the rubble, the people of Munich wanted to bring the market back to life. Using funds from the city, they were able to rebuild their beloved market. They renamed the new market using Latin influences, “Viktualienmarkt” (victualia meaning groceries/food).

A Place for the Connoisseur and the Average Consumer

The Viktualienmarkt is divided into seven zones by their variety and their products sold. There is a great selection of local and foreign goods that a true ‘Münchner’ would refer to as ‘Standl’ or stall. They use the term when speaking about the restaurants and traditional place to go when you really want to see Munich culture. That is not all! In the middle of the Viktualienmarkts, there is a beer garden that has been there since the 1970s. In the Summer, it is a great place to meet friends and family and cool off with a cold local brew.

Come and See for yourself with Sprachschule Aktiv Munich!

The Viktualienmarkt is an experience that everyone should have when in Munich. It not just a shopping center anymore, but a place to relax and experience the Munich lifestyle. People from all walks of life and diverse cultural backgrounds come to the market and bring their own style and flare to the scene. You will find an array of produce and products that are like anything else you could find in any other city. The market is an essential part of the many Bavarian traditions.
The market is open Monday to Friday from 7 a.m. until 8 p.m. every week!

The Sprachschule Aktiv Munich organizes field trips all over the city, including the Viktualienmarkt!

Please feel free to check out our website and more information about German and other language courses here: https://www.sprachschule-aktiv-muenchen.de/en/german-course-munich/