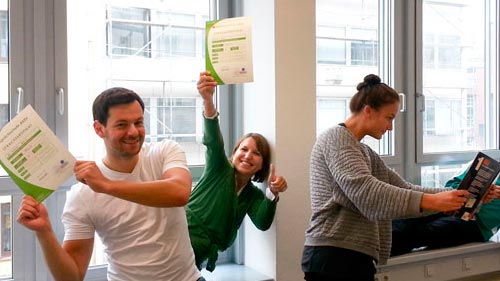 When it comes to learning German, there are many grammatical rules and structures that make little sense to foreign eyes and ears. The idea of umlauts, capitalized nouns, and article endings can be intimidating for beginners. However, that does not mean that it is impossible! Below we will take a peek into useful phrases and common grammatical structures that are essential to beginners. What about “Es gibt”, “da ist”, and “da sind”? There, there, there – Its Definition and Explanation in English

Although all three mean there is, they are used in certain circumstances!

When using “es gibt”, means that there is someone (or many people) or something (or many things) that exists or belong all together. It is a more general way of saying that something or someone exists.

“Da ist” and “Da sind” are used in situation when speaking about or showing an exact thing(s), person, or people.

What else is there to say?

When speaking out in the real German world, there are common colloquial phrase that are used. Check some of them out!

This is a greeting and a start to a casual conversation. The English equivalent is, “What’s up?”

This is another casual greeting and start to a conversation. The English equivalent is, “What’s new?”

This is something that would be casually said before eating a meal. This is the English equivalent of “What is there to eat?”

This would be used as a surprised, negative reaction. It is used when you cannot believe something. The English equivalent is “I can’t believe it!”
In German, you could also say ‘Ich glaub’s nicht!’

This question is asking, “do vampires actually exist?” Like any other question in German or English, the verb is place first following the subject.

‘Das ist/ Das sind’ is used when presenting or point out a specific place or thing. ‘Es gibt’ is used when introducing a new unspecific, general topic or thing.